In this text circumscribes the Dres dencritic and curator, Susanne Altmann, the Leipzig Aris Kalaizis' world as a claustrophobic tension space in which the figures seem to be on the edge of the selfresolution 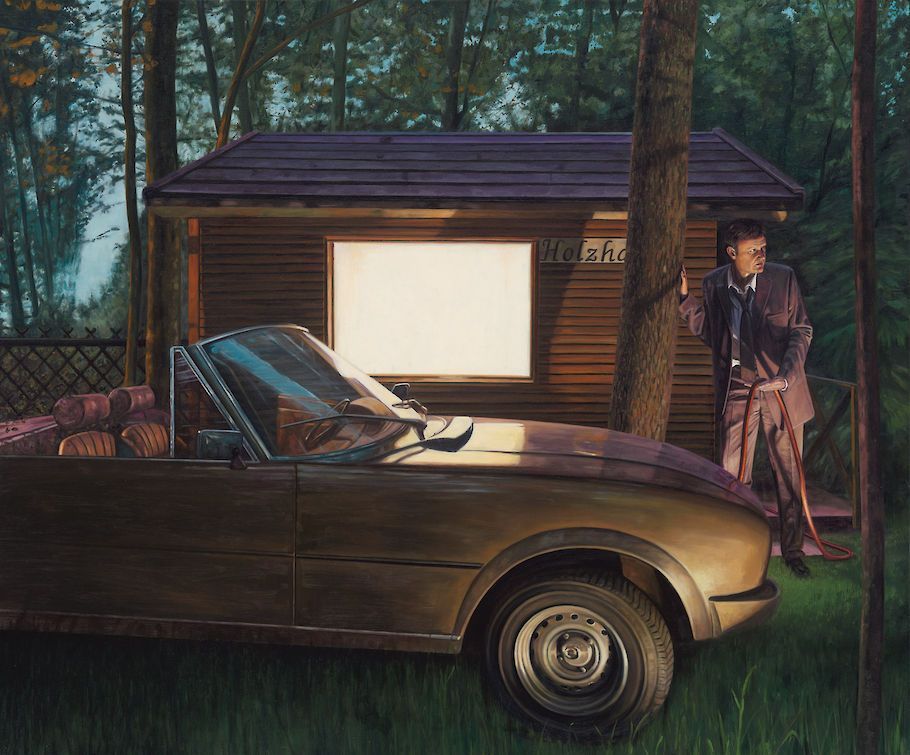 Leipzig. The car. The house. The forest. The man. These are the four elements combined by New Leipzig School painter Aris Kalaizis in his painting Holzhaus (The Cabin). They appear side-by-side on the stage of the canvas and, as in good theater, he manages to make the viewer forget that this constellation was contrived in the imagination of its author. We are captivated by the suggestive power of the plot and by its refusal of resolution. But what is the secret of this coherence?

...to create a metaphysical atmosphere

Why does this combination work? Is it the water hose in the man’s hands that holds the elements together? Is it the cleverly devised, artificial-looking lighting? Is it the tense, slightly milky air that makes this outdoor space vibrate? Or is it the starkly defined patch of dark soil on which the action unfolds? Water, fire, air, earth—an analogy to the four elements that hold our world together in general is one possible interpretation. In this reading, the male figure would be less a protagonist than a prop to create a metaphysical atmosphere. And the action really does seem to focus primarily on the brightly lit window of the wooden house at the center of the picture—although content of the kind one would traditionally expect at the center of a composition is simply refused.

Viewing this scene, one experiences an interplay of suspense, unease, curiosity, and identification whose psychological intensity is responsible for the unmistakable mood of many of Aris Kalaizis’s works. Independent of a supposed before or after, such scenes draw heavily on their similarity to movie stills. It is no coincidence that Kalaizis is attracted to filmmakers like Wim Wenders and Jim Jarmusch. In this sense, perhaps the bright aperture can be read as a reference to the magic of cinema, as a tribute to specific masters of the moving image. The house’s interior could be the setting for explosive, scintillating scenes with two actors, like Kim Basinger and Sam Shepard in a motel room on the verge of mental dissolution in Robert Altman’s Fool For Love (1986).

In many cases, the profoundest dimension of such movie plots unfolds beyond what we see on screen; in the kind of North American epic cinema clearly favored by Aris Kalaizis, the mood is often subliminally underpinned by invisible interactions, impenetrable set pieces or settings. Such moments, rich in indecipherable emphasis, are captured in his pictures; less as quotations than as symptoms of everyday absurdities and dark depths.

The kind of strange but far from inconceivable encounter featured in the painting Bahren is also part of this thematic range. As in The Cabin, the two protagonists meet outdoors, providing a showcase for the artist’s dedication and virtuosity in the portrayal of nature. Pentagrass, the most eerie motif in the current selection, is also set outdoors, in a park that actually exists, but the viewer is not offered much cause for relief. All three paintings contain highly claustrophobic components, which Kalaizis likes to put to programmatic use in terms of both spatial organization and psychological order. In interiors like Stella, this aspect is further intensified.

And because his pictures are carefully assembled out of individual photographic elements or based on existing text sketches, he can certainly be considered a director. This is what gives rise to the blend of apprehension and familiarity, banality and mystery that makes every one of his pictures an emotional and intellectual challenge for the viewer.

Susanne Altmann, born in 1964, is a freelance art critic and curator who writes for a number of several German newspapers and magazins. Altmann lives and works in Dresden.